In the latest episode of Genetics Unzipped, Kat Arney tells the stories of two women – one a scientist fascinated by dancing mice, the other a seamstress with a deadly family legacy – who made significant contributions to our understanding of cancer as a disease driven by genetic changes, paving the way for lifesaving screening programmes for families. 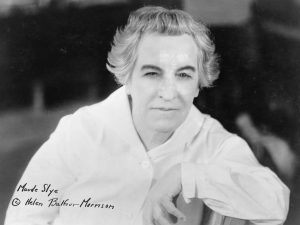 Born in Minnesota in 1879, Maud Slye was a cancer pathologist who dedicated her career to studying patterns of cancer inheritance in more than 150,000 mice. But as well as being a dedicated scientist (as well as a part-time poet), her ideas about eugenics brought controversy.

She wrote, “If we had records for human beings comparable to those for mice, we could stamp out cancer in a generation. At present, we take no account at all of the laws of heredity in the making of human young. Do not worry about romance. Romance will take care of itself. But knowledge can be applied even to romance.”

Even so, Slye’s work earned her a gold medal from the American Medical Society in 1914 and from the American Radiological Association in 1922. She was also awarded the Ricketts Prize from the University of Chicago in 1915 and an honorary doctorate from Brown University in 1937. She was even nominated for a Nobel prize in 1923.

Running parallel to Slye’s work in mice was the research carried out by Aldred Warthin, a doctor working at the University of Michigan in Ann Arbor. One day in 1895, a chance meeting between Warthin and a local seamstress, Pauline Gross, set the two of them off on a 25-year-long quest to understand why so many members of Pauline’s family had died from cancer at a young age.

Pauline spent years compiling detailed family histories, enabling Warthin to trace the pattern of inheritance through Family G, as it became known. Like Slye, Warthin was a fan of eugenic ideas. He is quoted as saying in 1922, “Today it is recognized that all men are not born equal. We are not equal so far as the value of our bodily cells is concerned,” and his work fell out of favour after his death.

Pauline’s detailed genealogy lay undisturbed in a closet in the university until the 1960s, when American doctor Henry Lynch and social worker Anne Krush rediscovered her work and continued extending and investigating Family G.

By the mid-90s, a century after that first chance meeting between Pauline and Warthin, researchers finally pinned down the gene fault running through Family G – a mistake in the MSH2 mismatch repair gene, now commonly referred to as Lynch Syndrome.

Today, members of Family G – and others around the world with Lynch Syndrome – can undergo genetic testing, with a range of preventative and screening options available.

The story of Pauline and Family G, and the impact that their genetic legacy has had on the family down the generations, is beautifully told in the book Daughter of Family G, a memoir by Ami McKay.

Listen to the full episode at GeneticsUnzipped.com

Listen to Genetics Unzipped on Apple Podcasts (iTunes) Google Play, Spotify, or wherever you get your podcasts